Difference between revisions of "A-10C" 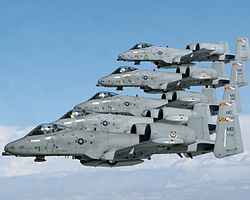 The Fairchild Republic A-10 Thunderbolt II affectionately known by many as the 'Warthog' is an attack aircraft that is built around the venerable GAU-8 Avenger 30mm rotary cannon. The A-10 is designed to attack (armored) ground targets and support friendly troops in the CAS (Close Air Support) role, but due to the way that the aircraft is setup is also excellently suited towards providing target information and tasking to other aircraft in the vicinity, in the A-FAC (Airborne - Forward Air Controller) or FAC-A role. The A-10C is a variant developed out of the initial A-10A model (which is included in DCS as a simpler, lesser fidelity Flaming Cliffs aircraft) and has been upgraded with a variety of sensors, such as GPS, compatibility with the AN/AAQ-28(V) LITENING targeting pod, a whole range of smart weaponry such as laser-guided and GPS-guided bombs and finally a digital avionics suite that allow for enhanced precise control of weaponry, and waypoints.

Although at first glance the A-10C is a slow and sluggish aircraft with little capability to defend itself against faster adversaries, the amount of weaponry it can carry and the amount of time you can be on station (due to the meager fuel consumption) is most excellent. The A-10C features excellent protection thanks to the large amount of armour protecting the pilot and vital avionics: most critical systems also features backup systems, with the flight controls being implemented with triple redundancy, ensuring you get home whatever happens. With a stores carrying capacity of 16,000 lb (7,260 kg) it can bring plentiful amounts of weaponry to the AO, including weapons such as the AGM-65 Maverick Anti-Tank missile, both the dumb Mk-82/-84 bombs and their laser guided counterparts the GBU-12/-16, JDAM GPS guided bombs, CBU-89/-97 cluster bombs and the AIM-9 Sidewinder. Of course your main weapon of choice is the fearsome GAU-8 30mm Avenger rotary cannon around which the airframe was built: the GAU-8 is designed to engage and destroy tanks, but is also an excellent choice against pretty much every target available.

Learning to fly the A-10C

CDU - Finding your way around in the world.

About the EGI - Information about the integrated navigation systems of the A-10C.

Up Front Controller - An easy and quick way for data entry and management.

TAD - Information about the TAD.

RWR - About the Radar Warning Receiver.

HUD - Information about the HUD.

Radios - Information about the A-10 radios and radio usage. Very important for TARS and refueling.

Datalink - How to send tasking coordinates and sexy text messages to members of your flight.