The Grumann F-14A/B Tomcat is a two seat, twin engine supersonic variable wing-sweep fighter aircraft. The F-14 was the first US fighter jet with twin tails and was the largest & heaviest US fighter to ever fly from an aircraft carrier. The reason that the F-14 was so incredibly large and heavy was because it carried the large AWG-9 radar and accompanying AIM-54 Phoenix (air-to-air) missiles: this very capable combination allowed the F-14 to make shots of up to 200 nautical miles at the bad guys. Also, being big means you can carry a lot of fuel!

Of course the practical range of the AWG-9 is rather more limited, especially if you are shooting at more manoeuvrable fighter-sized targets, but even at these closer ranges the AIM-54 Phoenix is still a capable missile that should not be underestimated. The F-14 is also capable of carrying an array of air-to-ground weapons, such as dumb bombs in both high and low drag forms, air-to-ground Zuni rockets and even laser guided bombs, which can be self-designated using the LANTIRN targeting pod on the F-14.

Most people will recognize and adore the F-14 because of its stardom presence in that one weird volleybal movie from the 80's. It's on-screen presence in movies will make the F-14 to appear docile and easy to fly, but due to lack of a fly-by-wire the F-14 can be a real handful: it being a pilot's aircraft however makes it fun to fly and learn. The analagous nature of the F-14 (comparable to the F-5E II Tigershark) will give you a good knowledge of the airplane over time, but requires a bit of a different mindset that the computarized flight of the F/A-18C and the F-15.

Partially or fully implemented weapons of the F14/A/B Tomcat:

When rearming, you mustn't change the flare/chaff selection from the default DCS rearm window - if you change it, the system may not work properly.

Instead, you should use your ICS radio menu and: 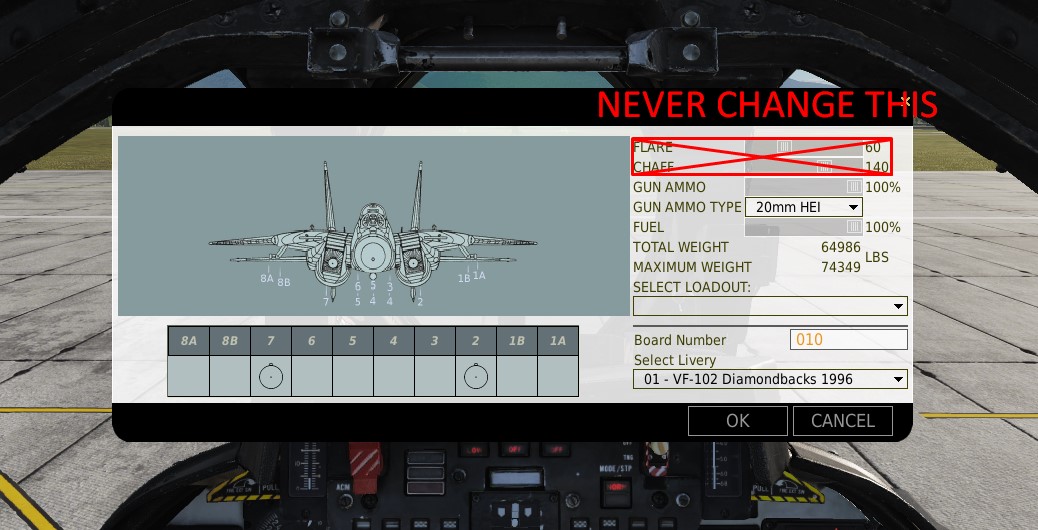