Credits to Jak for helping the F/A-18C page serve as a guide.

The Grumann F-14A/B Tomcat is a two-seat, twin-engine supersonic variable wing-sweep fighter aircraft. The F-14 was the first US fighter jet with twin tails and was the largest & heaviest US fighter to ever fly from an aircraft carrier. The reason that the F-14 was so incredibly large and heavy was that it carried the large AWG-9 radar and accompanying AIM-54 Phoenix (air-to-air) missiles: this very capable combination allowed the F-14 to make shots of up to 200 nautical miles at the bad guys. Also, being big means you can carry a lot of fuel!

Of course, the practical range of the AWG-9 is rather more limited, especially if you are shooting at more maneuverable fighter-sized targets, but even at these closer ranges, the AIM-54 Phoenix is still a capable missile that should not be underestimated. The F-14 is also capable of carrying an array of air-to-ground weapons, such as dumb bombs in both high and low drag forms, air-to-ground Zuni rockets and even laser-guided bombs, which can be self-designated using the LANTIRN targeting pod on the F-14.

Most people will recognize and adore the F-14 because of its stardom presence in that one weird volleyball movie from the '80s. Its on-screen presence in movies will make the F-14 to appear docile and easy to fly, but due to lack of a fly-by-wire the F-14 can be a real handful: it being a pilot's aircraft however makes it fun to fly and learn. The analogous nature of the F-14 (comparable to the F-5E II Tigershark) will give you a good knowledge of the airplane over time but requires a bit of a different mindset that the computerized flight of the F/A-18C and the F-15.

Partially or fully implemented weapons of the F14/A/B Tomcat: 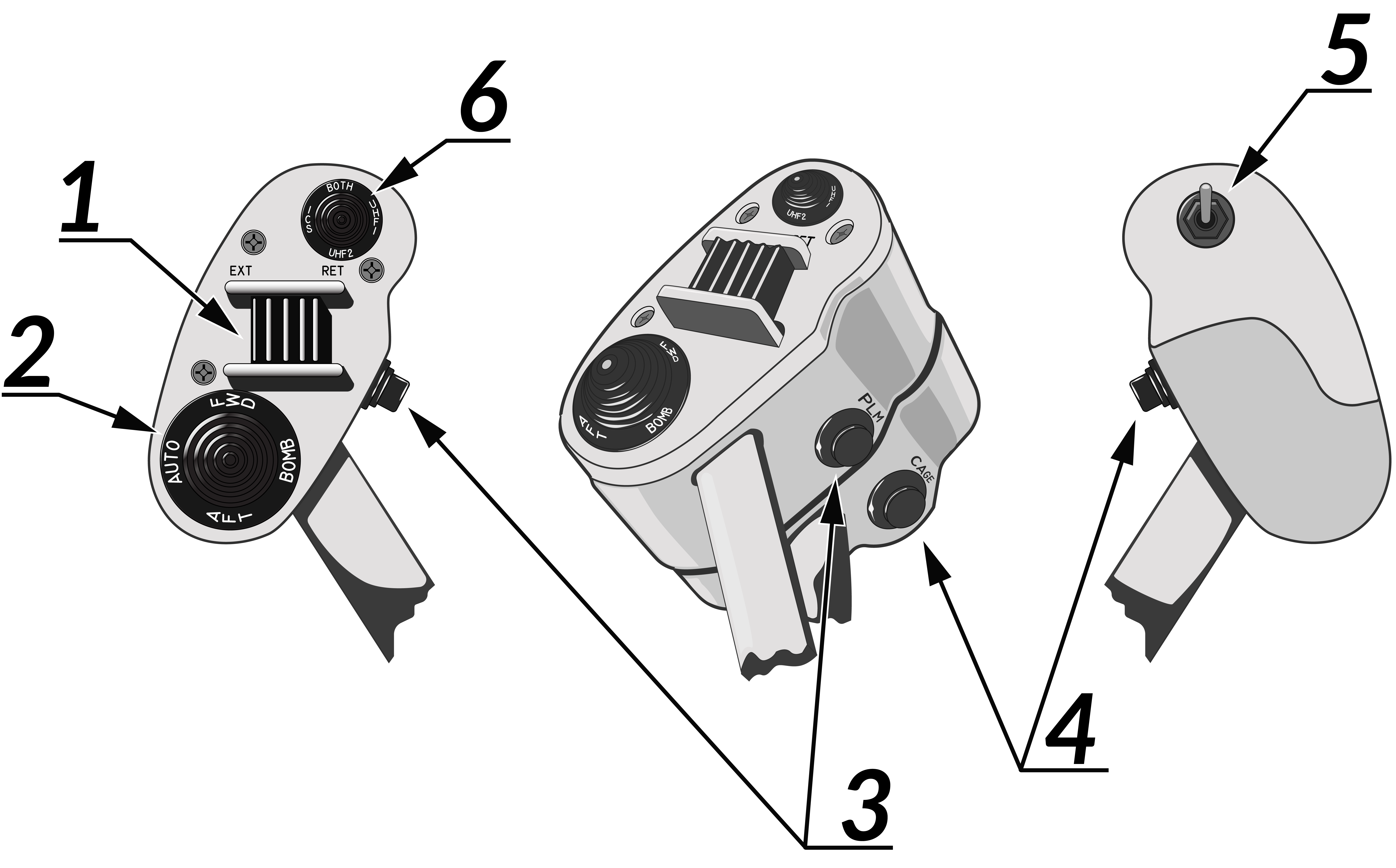 The throttle of the F-14 Tomcat consists of 2 quadrants, both for the left and right engines. There is an afterburner detent along with a cutoff detent for maximum throttle and shutdown of the engine for each quadrant.

The throttle has the following controls: 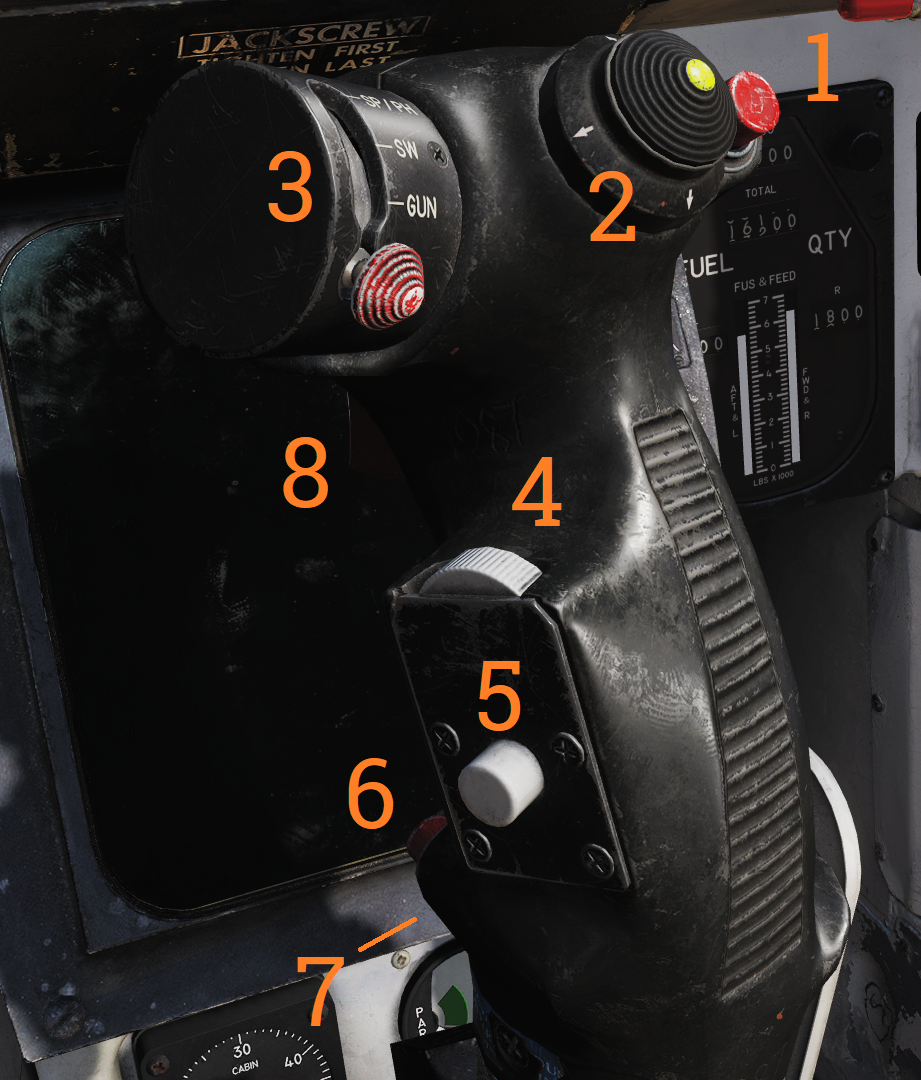 The control stick has the following controls: 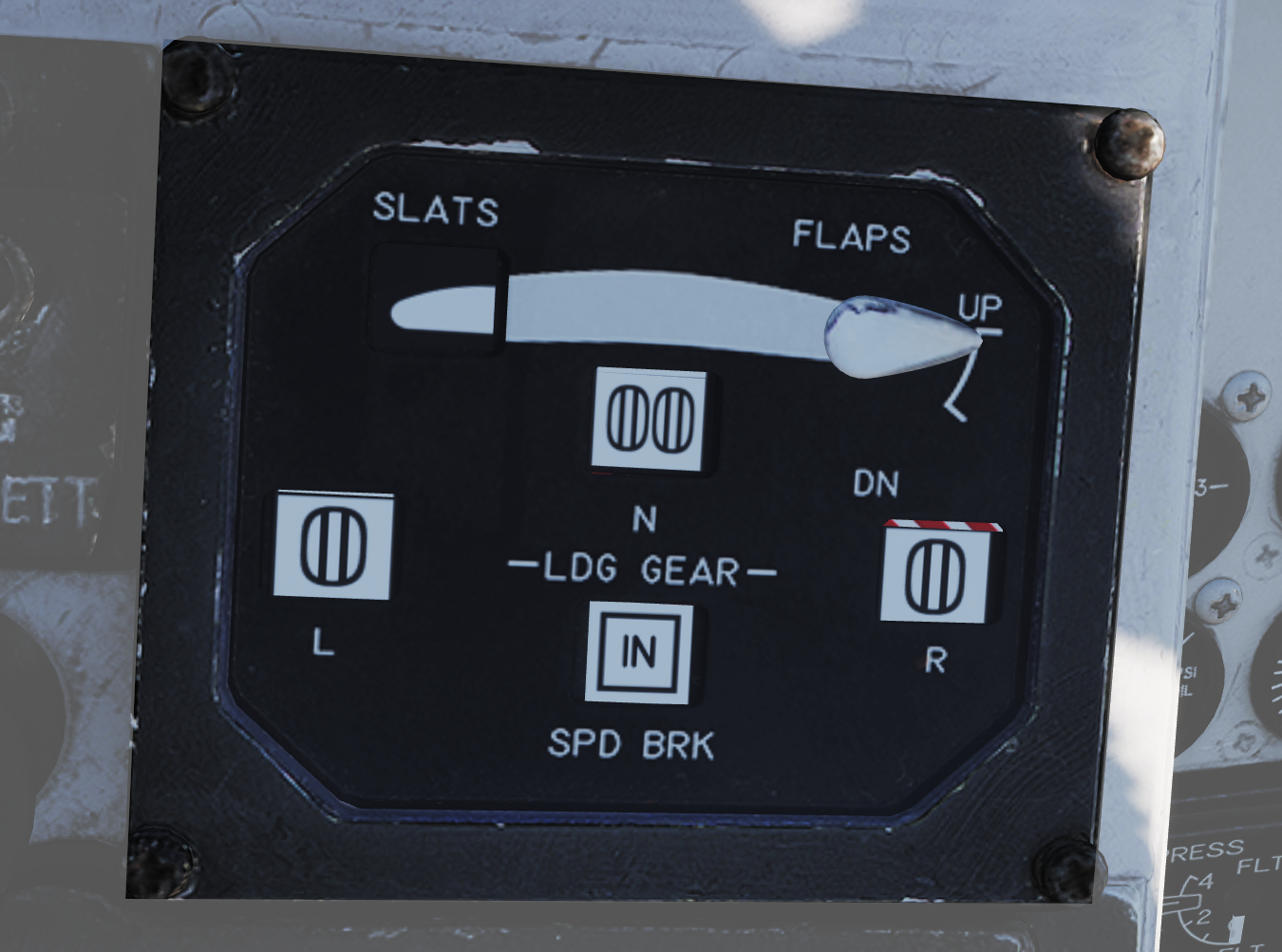 The F-14B has a large hydraulic system which covers for all of the control surfaces of the aircraft. Without the hydraulic system, or taking damage the controls are in risk of improperly working. The F-14 Tomcat was the last of its generation to have no integration of an FBW or FCS system, which was introduced with the F-15 Eagle.

The F-14's primary flight controls are:

The control stick controls the stabilators, ailerons, and rudder and the rudder pedals control the rudder.

The aircraft's flap system provides more lift (and as a byproduct, drag). The flaps lever has two positions:

The flaps lever allows for variable movement, which gives the pilot the ability to control the amount of flap they wish for.

The speed brake is a flap located on the end of the aircraft designed to provide drag to decelerate faster. It is activated via the speed brake switch on the throttle. The two positions are:

The tailerons are capable of being trimmed to make roll and pitch corrections. This is accomplished with the trim hat on the controls stick. When the autopilot system is engaged, the onboard computer will attempt to make active trim movements in order to keep the aircraft within the specified attitude when set, along of the setting parameters. As speed is either gained or lost, the trim will actively move the stick as well along of the tailerons to adapt.

The wings of the aircraft are a variable-sweep design allowing for automatic or manual movements from pilot input on the right throttle quadrant. Similar to wing fold, the wings are able to be overswept from its maximum position through a master reset of the system in order to allow tighter space and closer parking on the carrier deck.

The nose gear features nosewheel steering (NWS) controlled by the rudder pedals. With the weight off of the wheels, it is disengaged. It automatically engages upon there being the weight on wheels. NWS is disengaged manually via the button on the stick.

On the front nosegear is a launch bar that attaches the airplane to a catapult from launches from an aircraft carrier. Its deployment is pilot-controlled, but it is connected to the catapult by the ground crew (DCS default binding is U).

The F-14 Tomcat has the ability to automate certain types of flight via its Automatic Flight Control System (AFCS) and Automatic Throttle Control (ATC). The AFCS, or simply the autopilot, control the flight surfaces and the ATC controls the throttles. 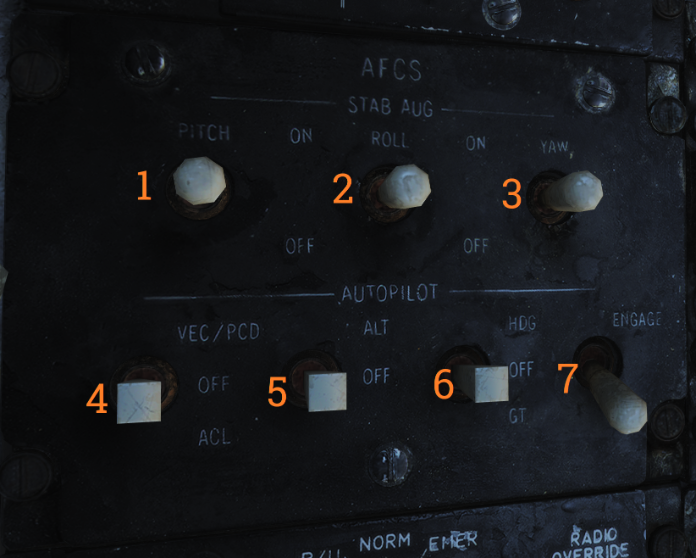 The automatic throttle control (ATC), or just "autothrottle", controls the physical throttles and thereby automated thrust control. ATC is toggled via ATC engage/disengage switch next to the throttle. When the ATC is engaged, the physical means of the throttle quadrants will begin to move on their own. However, whenever the pilot makes any new movement to the throttle whatsoever, the ATC will disengage to allow pilot control over both of the engines. The ATC is primarily used for landing on a carrier along of the ACLS system. 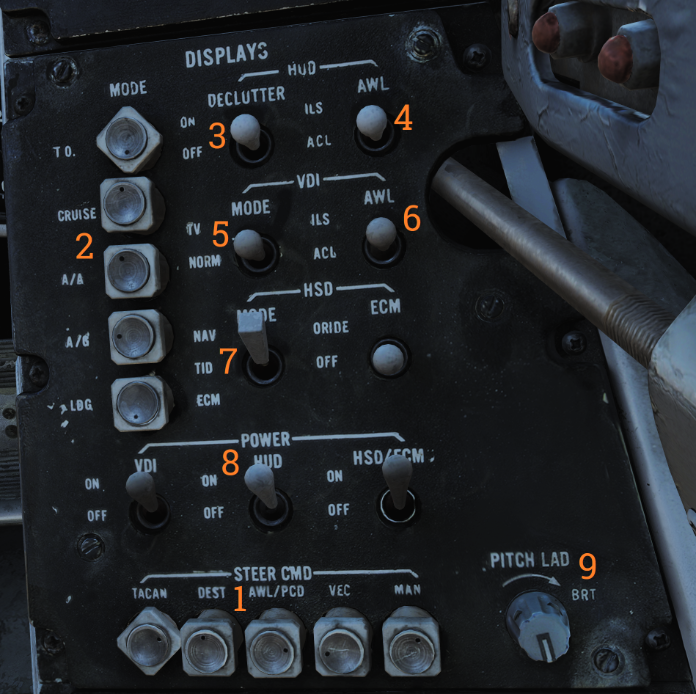 The F-14 Tomcat comes with 2 digital display screens in the Pilot cockpit:

The F-14 Tomcat has 5 primarily modes for information displayed. The 5 master modes are:

Additionally, the F-14 Tomcat has an Air Combat Maneuver (ACM) panel which controls all air-to-air and air-to-ground aspects for armament.

The head-up display (HUD) is a projected display at the front of the cockpit that serves as the primary flight instrument. It also provides various indications for weapon delivery; this section will cover the HUD's indications in NAV master mode. Master mode/weapon specific indications on the HUD will be covered in the relevant section.

Via the switches next to the TO button on the displays panel, you are able to "declutter" or remove information off of the HUD.

The F-14 Tomcat has an inertial navigation system (INS) that allows the pilot to navigate by internal gyros aligned. However, due to the fault of having no GPS assistance, these gyros slowly drift over time and cause misalignment for visual information. 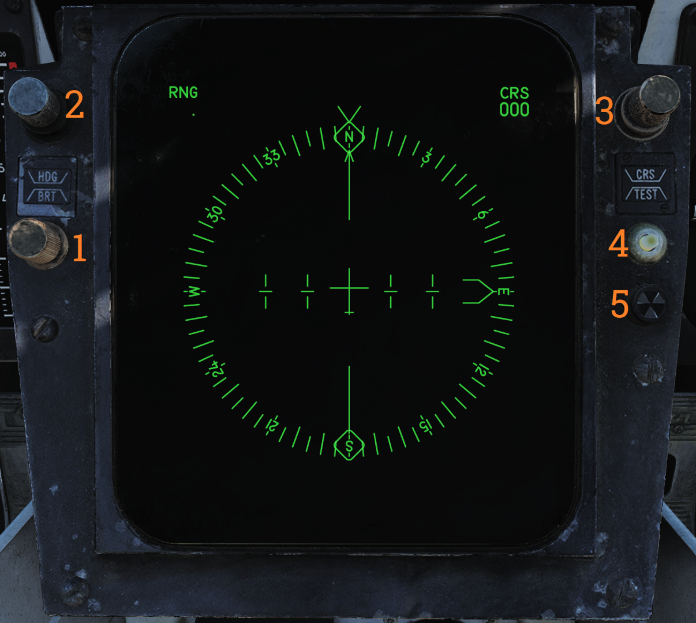 The Horizontal Situation Display Indicator (HSD) is the primary interface with the airplane's navigation systems. The HSI can be accessed from the bottom display screen. The basic function of the HSI is a rotating compass with a looking-from-above perspective. The controls for this screen are: