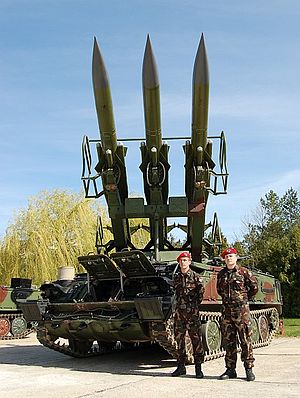 The DCS universe is full of things that are constantly trying to kill you. In some cases, such as DCS: Black Shark, even your very own aircraft wants nothing more than to introduce you to the ground with maximum prejudice. In other cases, the threats you will encounter are proper anti-aircraft platforms, and that's what is covered here.

It helps to get an idea of what's out there. You should know when it's okay to dirty yourself when you hear BEEP! BEEP BEEP! come from your RWR vs. when it's safe to turn music back up. A SA-13 Gopher isn't much of a threat when you're 20,000 AGL, but if you see an SA-10 Grumble or one of its radars pop up on your green screen, well, it's probably a good time to call the wife and kids and tell them you might be stuck at the office for a while.

Here is a list of symbology that can be found on most modern (Western) fighters: note that the Russian planes may make use of a different RWR system that does not use these symbols. Note that the symbols denote critical differences between various threats: an American F-15C jet aircraft will have the same symbol ('15') as a Russian SA-15 Tor SAM system: the ^ HAT symbol differentiates between airborne or not airborne threat.