NOTE: This guide is currently under a work-in-progress (WIP) state. If you have any information pertaining to the topics or feedback, please relay them over in the Hoggit Discord #wiki-discussion channel. Thanks!

This page is focused on the DCS World SU-25T Frogfoot. Some information may be missing.

Designed on the Su-25UB frame, the rear seat was removed to accommodate additional avionics giving the SU-25T all-weather and night attack capability. In addition to the full arsenal of weapons of the standard Su-25, the Su-25T can employ the KAB-500Kr TV-guided bomb and the semi-active laser-guided Kh-25ML (and its variants) thanks to the Schkval optical TV and Prichal laser rangefinder/target designator housed in its enlarged nose cone. It can also carry Vikhr laser-guided, tube-launched missiles, which is its main antitank armament. For night operations, the low-light TV Merkury pod system can be carried on the center-line mount under the fuselage.

The Sukhoi SU-25T (Танковый (Tankovy)) is a dedicated CAS (close-air-support) aircraft that excels in ant-tank and anti-infantry operations. However, the SU-25T is more than capable of filling roles such as:

The SU-25T is truly a multi-tool of an aircraft and though it is a direct upgrade of the SU-25 in terms of armament and weapons delivery it takes a step back in terms of speed and handling as the added weight dampens the flight characteristics. An easy and forgiving multi-role ground attacker for beginners, a skilled pilot with an understanding of its performance can wreak havoc on the battlefield.

The cockpit of the SU-25T is a fairly standard design for aircraft of its time. Flight control is done via a center stick and left-hand throttles. The instrumentation is largely made up of analog gauges and indicators. The cockpit itself is a bathtub design composed of multiple welded titanium plates. The armored bathtub design of the cockpit results in cramped conditions, poor forward visibility, and next to non-existent rearward visibility.

The cockpit of the DCS SU-25T is in Russian however there are texture mods that are IC (integrity check) compatible that change the cockpit and instrument labels to English if you so wish.

The cockpit instrumentation in the SU-25T is made up of analog gauges and illuminated indicators. They can be sorted into the following categories.

Show information such as Airspeed, Angle of Attack and G-Force, Rate of Climb, and Altitude (Radar and Baro)

The DCS SU-25T has both English and Russian localizations available for Avionics. 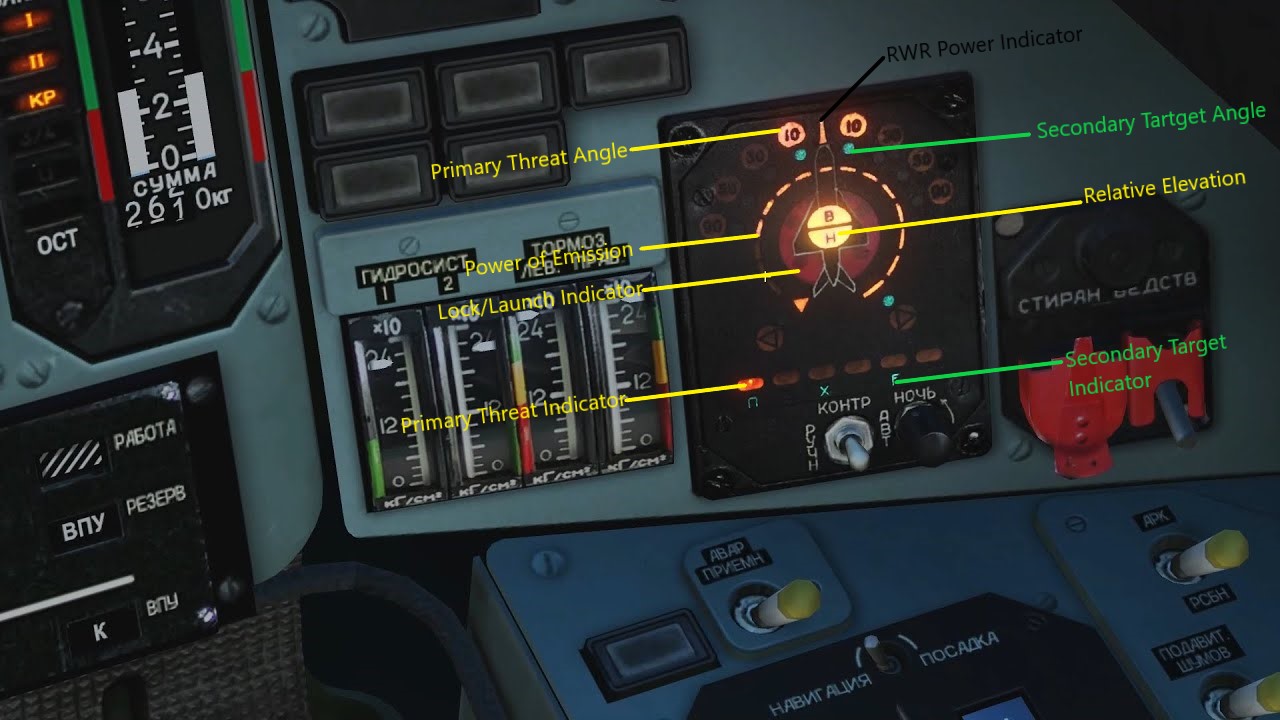 The SU-25T is equipped with the SPO-15 Beryoza Radar Warning Receiver which receives incoming radar signals and categorizes incoming radar signals into one of 6 categories as well as identifying the distance, angle, and elevation of the emitting source relative to your aircraft within a 180-degree forward azimuth and -30 to +30 degree forward elevation arc. It is also capable of identifying the launch of radar-guided anti-air missiles.

The SPO-15 communicates radar threats to the pilot through a combination of illuminated enunciators and various tones, the volume of which can be controlled by pressing RAlt+, & RAlt+.

The yellow, numbered circles represent the primary threat angle in degrees azimuth, relative to your nose. If 2 are illuminated it means the threat is between the arc (Example: If 30 and 50 are illuminated it means the primary target is likely 40 degrees azimuth from your nose.) Below these circles are the green "secondary threat" indicators. their function is similar to the yellow "primary threat" indicators but for all secondary threats and will show all secondary threats being detected. In the center are the yellow "power of emission", "relative altitude" and the red "lock/launch" indicators. When a primary threat is detected the red "lock/launch" indicator will turn solid to indicate radar lock alongside a constant high pitched tone. The yellow "power of emission" indicator will illuminate starting on the right and move counter-clockwise to indicate distance from your aircraft. The yellow "relative altitude" indicator will illuminate to show the primary threat's altitude relative to your aircraft. When the red "lock/launch" indicator begins flashing as a rapid high-pitched beeping is heard the missile has been fired and is tracking your aircraft.