Overwatching aircraft key their movement to terrain and their distance from the main element. It also remains ready to fire or manoeuvre, or both, providing support to main elements. Units often employ contour or NOE flight with the travelling overwatch technique using high and varying airspeeds depending on weather, ambient light, and threat.

Company elements employ bounding overwatch when they expect enemy contact and the greatest degree of concealment is required.

It is the slowest movement technique; too slow for high tempo operations and vulnerable for non-linear and/or urban operations. Individual aircraft or aircraft teams employ alternate or successive bounds.

One element remains in position to observe, fire, or manoeuvre before the other element moves.

Overwatching elements cover the progress of bounding elements from a covered and concealed position, which offers observation and fields of fire against potential enemy positions.

The length of the bound depends on terrain, visibility, and effective range of the overwatching weapon system.

Units normally employ contour and NOE flight with bounding overwatch technique. Airspeed during each bound is varied depending on availability of vegetation and terrain for concealment.

Manoeuvrability is a prime consideration for Gunship operations.

providing their own horizontal and vertical clearance.

The basic Gunship formations are:

Combat cruise is used when teams wish to move quickly and maximize use of terrain for masking.

Combat cruise allows the wingman flexibility in manoeuvring the aircraft left or right of the lead aircraft’s centreline.

The wingman should never track in straight trail as it limits forward observation and the ability to provide suppressive fires for lead.

It also increases the possibility that the lead’s presence has alerted the enemy to the wingman’s flight path.

Separation should be 150 meters or more depending on terrain and threat. 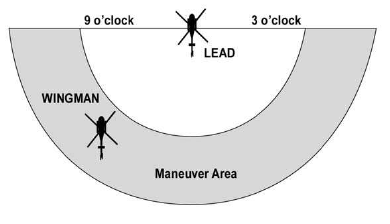 Unlike combat cruise, combat cruise right/left requires the wingman remain in either right or left cruise and change sides only after coordinating with the lead aircraft.

Using combat cruise right/left, the wingman remains in an arc 0 to 90 degrees aft abeam of lead to the left or right side.

Optimum position is 45 degrees. Separation should be 150 meters or more depending on terrain and threat.

Observation sectors are divided between lead and wing providing overlapping observation and fire. 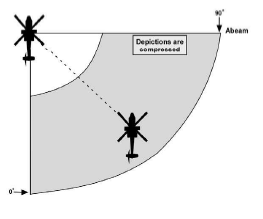 In DCS during daylight it is frequently difficult or impossible to see from within the cockpit AAA gun or cannon fire directed at you until the aircraft is terminally damaged.

At best you may be aware of tracer flying past the cockpit but unless the attacker is clearly near and visually obvious, its location will not be seen.

However, this tracer fire is often seen by an element located at least 100m or more off to one side, the further away the better the degree of visibility.

In order to improve survivability in areas known or suspected to have AAA capability, WING will adopt Combat Cruise WIDE, left or right dependent on anticipated break or egress direction.

This position should be slightly higher than, and as far to one side of LEAD as possible, whilst still maintaining visual contact - ideally at the 4 or 8 o’clock position.

This will best facilitate either LEAD or WING recognising incoming tracer AAA, calling break to the targeted element and noting the tracer source position.

Normally both LEAD & WING will break, re-form and plan an attack if appropriate.

When flight lead announces combat spread, he includes the command left or right.

Wingmen should move toward that abeam position, either lead’s 3 or 9 o’clock position.

Flying in combat spread requires a rapid scan to maintain situational awareness of the other aircraft as well as approaching terrain; this requires even more vigilance at night.

For planning, the wingman should maintain approximately ten rotor disk separation from the lead aircraft.

Continuous NOE or contour flight is unusual because terrain and vegetation vary. Normally, there is a transition from one mode to the other as the situation dictates. Modes of terrain flight are defined below. 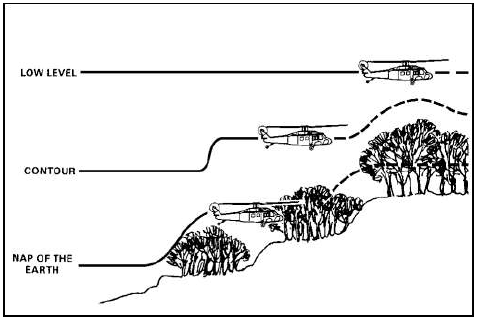 NOE flight is conducted at varying airspeeds as close to the earth’s surface as vegetation and obstacles permit. Aviators should decrease airspeed if weather and ambient light restrict visibility.

Contour flight is conducted at low altitude conforming to the earth’s contours.

It is characterized by varying airspeeds and altitude, dictated by the terrain and obstacles.

Masking is a technique utilising terrain to mask (cover or conceal) the aircraft from threat detection and weapons employment.

Unmasking is a manoeuvre used when it becomes necessary to observe points of interest that are obscured while in a masked position.

Before unmasking, a thorough map reconnaissance should be completed so that all eyes can be focused outside during the unmasking.

The three general types of unmasking are as follows:

This type is used when the aircraft has forward speed and can best be described as a quick "pop up and peek" at the desired point or area of observation.

It is usually used while flying behind a ridge-line or other linear barrier.

Unmasking at a hover (vertically)

Moving the aircraft vertically from a hover position behind a feature.

When possible, unmask at a safe distance from the mask to allow a rapid descent to a masked condition if the aircraft is detected or fired upon.

Be aware of a common tendency to move forward or rearward while vertically unmasking and re-masking.

Establish reference points to assist in maintaining position during ascents and descents and keep aircraft exposure time to a minimum.

Unmasking at a hover (laterally)

Sometimes, the aircraft may be unmasked by moving laterally from the feature to provide the smallest silhouette possible to enemy observation or fire. Keep aircraft exposure time to a minimum.

Once all significant air threats are eliminated, an orbital pattern can be undertaken to observe

When flying as a pair, maintaining seperation can be achieved by the following: 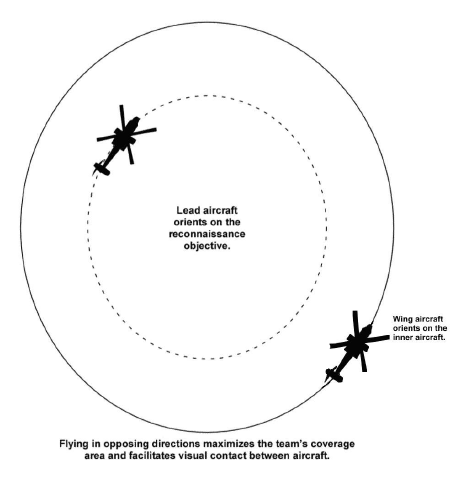 Gunships may employ different attack methods to engage the enemy and these are generally classed as:

High attack is used during diving fire when aircraft are required to maintain higher altitudes, normally greater than 1,000 feet. Useful for following targets through urban areas.

A disadvantage is the higher altitudes enable greater effectiveness of some threats such as missiles.

Low-level attack is used when the aircraft is required to maintain near terrain or NOE when engaging a target; normally used during hover or running fire.

An advantage of this technique is:

A disadvantage is the aircrew cannot engage the target at maximum range of the weapons system due to targeting hindered by a level viewing angle.

The bump or pop-up attack is used to take advantage of masking terrain while increasing the angle of attack; normally used during running fire, transitioning to diving fire.

Each aircrew pops up up prior to or during weapons engagement and then returns to terrain flight altitude.

Advantages of this technique are:

Firing helicopter weapons systems requires a great deal of skill by the pilot. These skills require constant development and sustainment and include aircraft control and burst on target.

The diagram below shows diving fire. 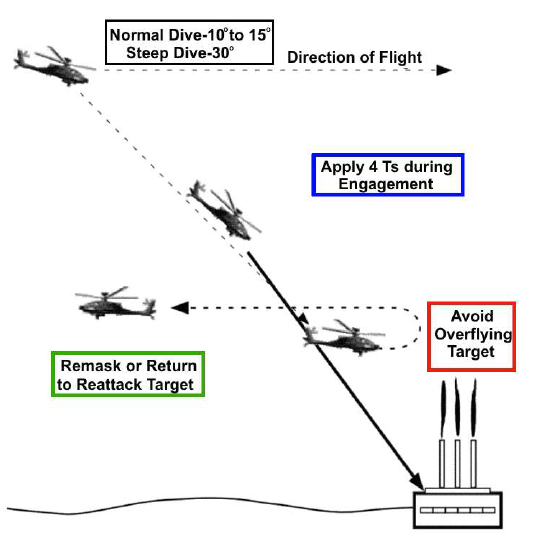 Teams utilise attack patterns to maximize weapons effectiveness and minimise exposure to the threat. Examples of attack patterns utilised by the SWT are racetrack pattern, L attack, and cloverleaf attacks.

A simultaneous attack is executed from combat spread or combat cruise formation and is normally utilised when taking fire from the target area. Wingman’s attack is timed to provide suppressive fire for lead’s break-off of the target. 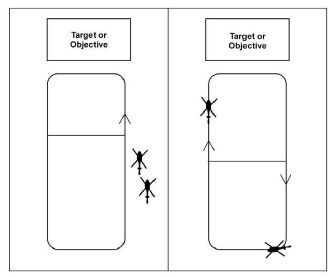 Example of simultaneous and continuous attacks

Wingman may also fly roughly 45 degrees offset from lead on the side opposite lead’s break. 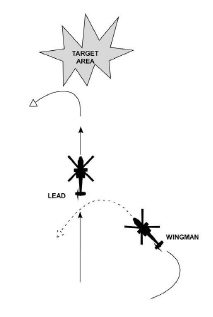 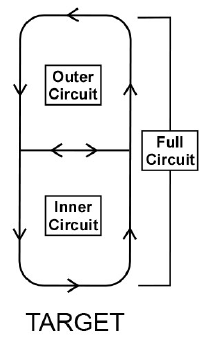 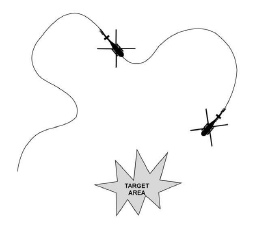 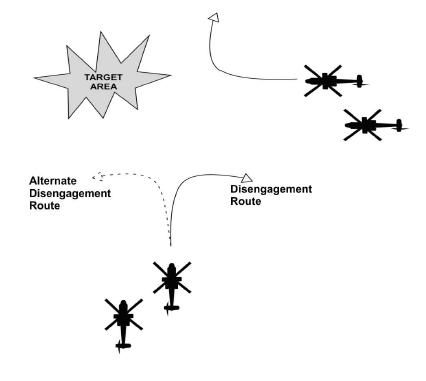 Often the terrain and position of the enemy does not lend itself to a symmetrical pattern, so the GST may establish a pattern conforming to the situation.