Why is a unit missing from a country!? 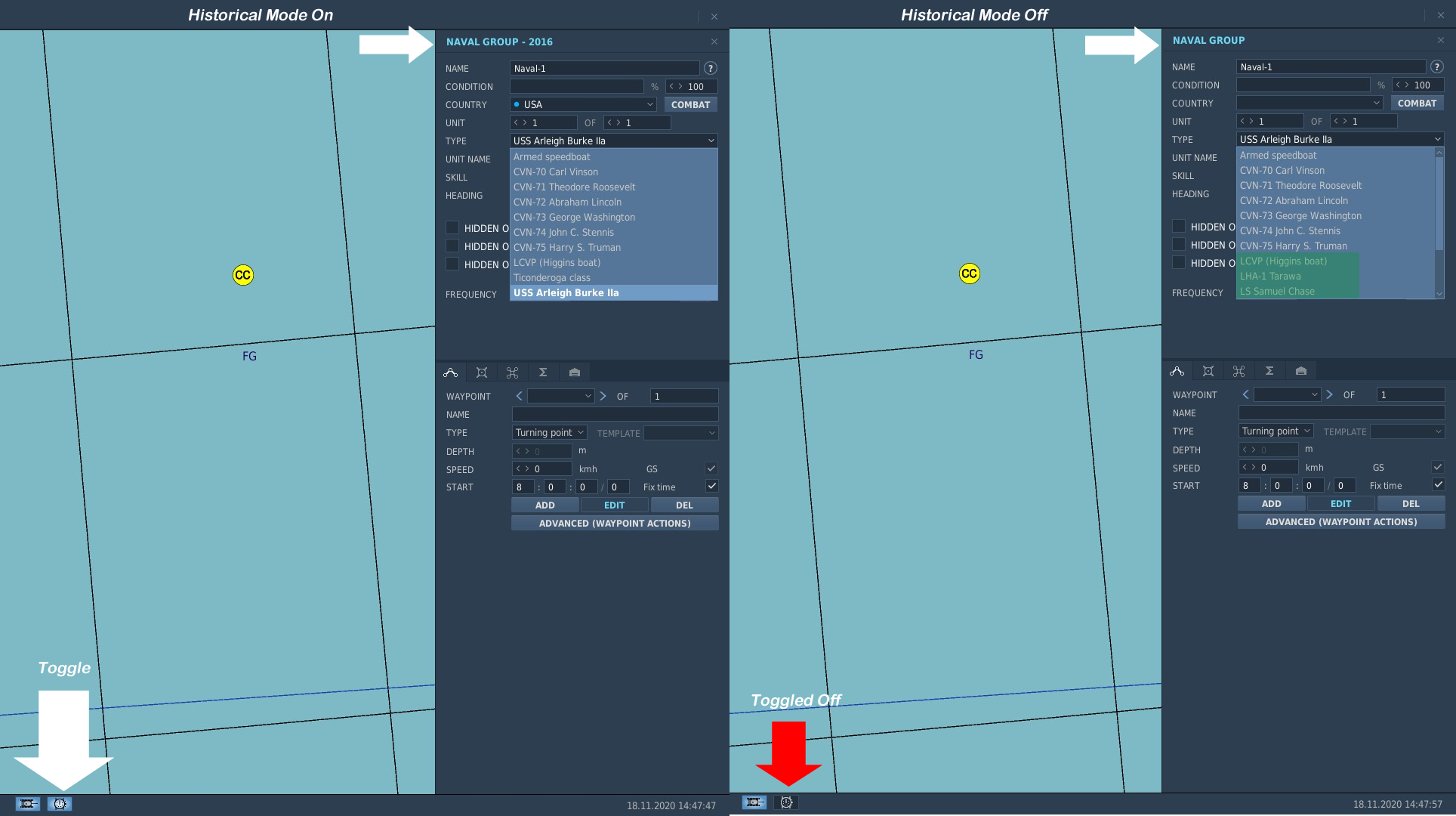 A: The unit is missing from a database that assigns it to a given country. The most common answer is that you are in "Historical Mode" which limits the selection of units based on the current date of a mission. This option can be toggled on or off at any time while editing the mission via the watch icon on the bottom bar. You will also see the year added at the top of the group panel.

Note screenshot. There are more unit types to choose from (scroll bar) and three new ship types are visible. Two are WW2 era ships and the Tarawa class was taken out of service in 2009. Thus the 3 ships are not available in the year 2016.

Why can't I see a livery?

Why doesn't this trigger execute?

A: The trigger is set to execute once at mission start. It is impossible for the condition that checks the time it was executed at to be more than anything else.

Why do AI aircraft keep attacking before I want them to? 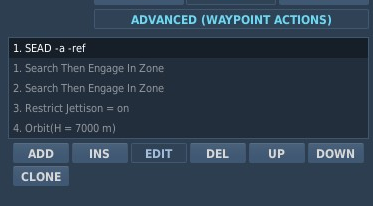 A1: Most likely it has to do with the tasking they are given. By default whenever you place a group most of the task types will add a pre-assigned task. This will occur with the AFAC, Anti-ship, AWACs, CAP, CAS, Fighter Sweep, SEAD, and Refueling tasks. It is only a real problem with the Anti-ship, CAP, CAS, fighter sweep, and SEAD tasks as these tasks are effectively just a "Search Then Engage" task. When active the AI will attack any valid target that is detected at any range. It is great for just placing an AI and watching them attack something with no other setup. It is not so great when you want AI to do something specific.

In the sample screenshot to the right default task is highlighted and the AI are assigned to do SEAD, Search then engage in two zones, restrict jettison, and to orbit at the waypoint. The AI is allowed to attack any SAM site that is detected before arriving at the waypoint.

A2: It is also possible that the group's "Rules of Engagement" setting (ROE) is set to "Weapons Free" or "Priority Designated". With either of these settings the AI is allowed to go "off mission" and attack any target it is capable of. This includes F-15C armed only with A2A weapons deciding to do a gun run on a truck it saw.

Solution: Set ROE to "Only Designated"

Why isn't an AI task, option, or command working?

It most likely is caused by the task queue. Put simply tasks are assigned sequentially in the list, however some tasks must be finished before moving on to the next task in the list. The tasks that can cause other tasks to wait to be assigned are only in the "Perform Task" category. Some of these tasks can end naturally, for instance "attack unit" is complete when the unit is dead. Otherwise stop conditions will need to be added.

In the example to the left the orbit task blocks setting the option to restrict jettison. The orbit task has no end condition and will effectively be active until the aircraft runs out of fuel and lands. Simply swapping the order will allow the jettison option to be set. It is typically a good idea to always add any commands and options at the top of the queue.