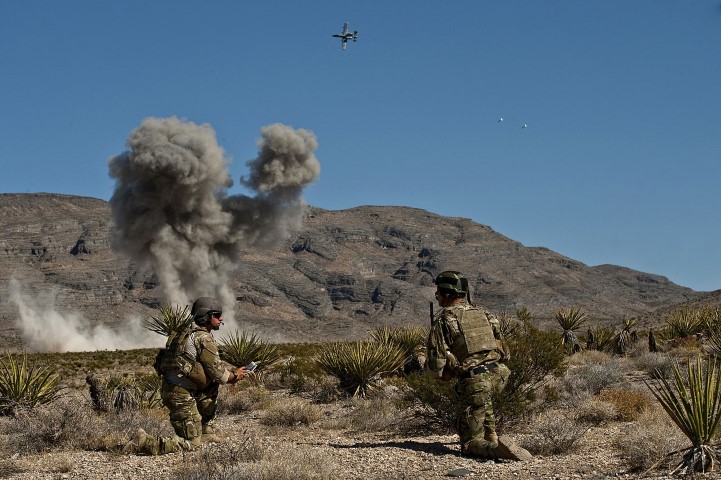 Joint Terminal Attack Controllers (JTAC's) are the people who coordinate the attacks of Close Air Support (CAS) flights in a specific target area. Their purpose is two-fold. First they coordinate and deconflict the attacking aircraft to prevent friendly casualties on the ground or in the air. Secondly they guide the attacking aircraft to their targets ensuring effective application of force to quickly eliminate the enemy positions.

A variation on this is Forward Air Controller, Airborne abbreviated FAC(A). These units perform the same tasks as JTAC's, but from an airborne platform.

How CAS flights work with JTAC's

When approaching the CAS Aircraft will check in with the JTAC. The JTAC will give the aircraft a holding position and will then provide the SITREP and GAMEPLAN - the situation on the ground and an overview of what the pilot will be doing.

There are a few concepts to touch on before going deeper into the details of JTAC operations.

The first is Keyhole CAS - a simplified way to manage the navigation and orientation in a target area. A waypoint is designated a the center of the target area, this is the 'ECHO point'. Aircraft are oriented from this point, and keyholes are assigned in the four cardinal directions from ECHO, north is Alpha, east is Bravo, south is Charlie, west is Delta.

Aircraft are also provided distances, and altitudes oriented to these points. So if the JTAC wanted an aircraft to go to a initial point 10 miles north of the target at 12000 ft, you would direct them to 'Alpha 10, angels 12'.

One nuance, fixed wing distances are in NM, rotary are KN, so an Apache assigned D5 will be closer than an F18 at D5. 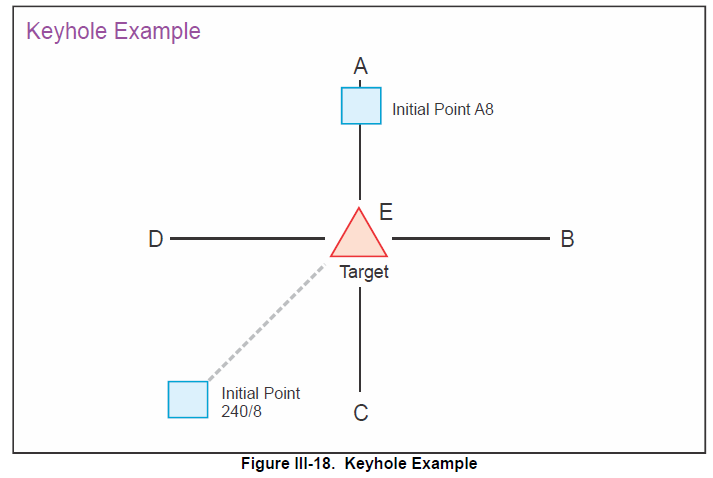 Secondly there are control types. There are three control types, from most strict to most lax.. If there were noncombatants or friendlies nearby you'd opt for a stricter control type - although in DCS most times type 2 or type 3 are appropriate:

Type I: JTAC acquires both aircraft and target, JTAC can visually confirm the aircraft's orientation towards the target before giving final clearance for the attack.

Type II: The JTAC can only see either the target, or the aircraft. The JTAC will clear the aircraft in to only attack a single target.

Type III: The JTAC can clear multiple attacks within a single engagement

And, finally 'Bombs on X:

Bombs on Target (BoT): The JTAC will do a 'talk on' to the target

Bombs on Coordinates (BoC): The JTAC provides high-precision lat/long of the target

The ordinance the pilot checks in with can inform whether the JTAC directs them for BoT or BoC.

A standard briefing is done by the JTAC to the pilot before the pilot makes their attack.. it is known as a '9-line' and contains specific details needed for the pilot to know the parimeters and constraints for their attack on the assigned target. 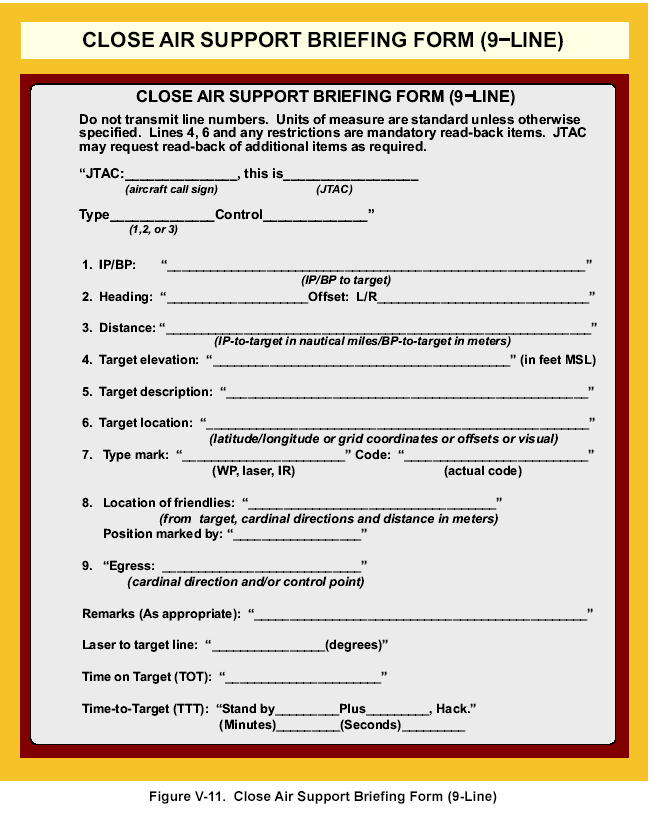 For BoC - the ordinance can be guided to a specific Lat/Long and that is sufficient, but for BoT, the JTAC must communicate the target to the pilot verbally, and must have confidence the pilot is looking at the right target before providing clearance. This process is called the 'talk on'.

If the JTAC has Smoke and a Laser the talk on can be very easy:

If the JTAC does not have these tools available, the the talk on will be more complex. Quoting USN 'ADVANCED NFO CAS PROCEDURES T–45C'

Putting it all together

Here's the script for the JTAC interaction with a CAS aircraft in the target area:

Being a Human JTAC

Filling the role of a human JTAC is a great way for assaulting an enemy airbase to capture it, such as Krymsk or Kraznodar in phase one; Gudata or Beslan in phase 2.

So how does one become a 'human JTAC' within the context of a DCS multiplayer environment? There are a few options:

Grab your huey or hip, load a CTLD JTAC group, and take it to a suitable location on a hill outside your target area. The advantage is that AI JTAC will automatically Lase and Smoke targets, leaving you just the communication portion. You can also pick up the group and move them to a new area once the targets are all shack'ed. The drawback is that the AI selects/prioritizes the targets (not you).

This is the method I've used for JTAC

Grab your huey or hip, load a CTLD Tow HMMWV, drop it on a suitable hill near your target. Now jump into a JTAC/Observer role, and use 'combined arms' to control the HMMWV. Use binocular view to select and lase targets.

The advantage is you can pick/prioritize the targets and you control the laser. The downside is that using smoke is less effective (it only lasts 60 seconds).

Stay with the 'spectator' role and use F10/F7 to observe a target area. Use SRS in AWACS mode for communication. One big upside is you don't have to spend a bunch of time flying a huey somewhere (and get shot down in the process). And you can see everything in the target area. But the downside is that you cannot mark a target with laser or smoke. You will have to be very good with your talk-on's.

One trick is that all enemy vehicles are by-default spawned in facing North, so you can quickly determine what way you are facing in F7 view by noting the vehicles' orientation.

You can also do airborne Forward-Air-Controller, using an aircraft with a laser designator and targeting system, such as an Apache, Gazelle, or A-10 with a tpod. Downside here is you have to fly, communicate, and work your laser (autopilot modes should help!). Also you can't mark with smoke, and you only have so many pounds of Jet-A before you have to go off station.

Once you are ready, select a frequency to use to do your controlling, and announce it on SRS common and on discord ala:

One of the most important responsibilities for a JTAC is deconfliction, ensuring one aircraft does not fly into or drop ordinance on another. This happens both during the attack and while aircraft are holding for their turn to run-in.

The easiest way to provide separation for multiple aircraft waiting their turn for 'inbound' is to do a simple vertical stack at the holding point. Simply stack aircraft, separating them by some amount. For example, these aircraft are deconflicted by assigning them holding points with 2000ft vertical separation:

Another deconfliction example with Apaches and fixed wing strike aircraft. In this example you could have two groups conducting simultaneous attacks, while safely deconflicted from one another..

This ensures the apaches and F18 have vertical separation (Apaches low, F18 high) and deconflicts ordinance release, type 2 for the F18 on specific targets east of the field reduces risk of 'splash damage' to the Apaches operating west.

Know the state of SAM's in your target area. you may want to wait until the medium/long range sams have been knocked out by anti-radiation missiles. Warn your pilots about any enemy /hazards/ like AAA or manpads. Be sure you maintain your control points outside of the range of the enemy. its also handy to have some CAP aircraft that ensure your CAS flights aren't getting engaged while orbiting at their control points.

Keep an eye out for threats while your pilot is "in" - call out 'SAM' (sam launch) or 'GUN' (aaa fire). Keep your pilots away from threats, above 12k for MANPADS, and above 7k for AAA.

Have the high ground - set up your JTAC position on a hill such that you can look down on your targets.

I dont know if it's legit, but I will often set a control point at say 'Alpha 12' and the IP at 'Alpha 8' - just have the pilot run in from their control point flying straight to target (reporting 8 )

I vary type 2 / type 3 control based on number of aircraft I have in my AO. If there's only one aircraft, I'll clear them in under type 3 so they can kill as many enemy units as they can on a single pass. If I have multiple aircraft I will do type-2 control, as this shortens the wait for the queued aircraft and gives everyone a chance to get kills.

Consider stating in your 'sunrise' 'check in with ordinance guidance type, laser/gps/unguided' - and use that check-in to vary BoT/BoC.

Keyhole points are oriented at the target 'ECHO' point. you can use your planes nav system to orient by setting your bullseye to the ECHO waypoint

if your airframe has a laser spot tracker know how to use it, it will ease the talk on and identification of the target if your LST can just acquire it for you